How Much Water Should I Drink a Day?

When I am working with my nutrition clients, hydration is an area that I always focus on as part of their nutrition program. You can over and under hydrate and both have consequences for overall feelings of health and wellness. Most of the clients I see underestimate the importance of hydration and are perpetually under hydrated to some degree. This can lead to feelings of fatigue, headaches etc. Adequate hydration is vital for good health, and plays a major part in  prevention of illnesses such as infection, lubrication of joints, transportation of nutrients to our cells, sleep quality, temperature regulation and blood circulation. After all, our body composition is roughly 60% water.

Here are some tips for optimal hydration.

How Much Water Should I Drink a Day?

Research studies have struggled to come up with an exact, optimal amount of hydration for adult men and women on a daily basis. European and U.S. studies estimate that optimal water intake varies from 2.5L to 3.7L per day for men and between 2L to 2.7L per day for women. A 120kg male athlete who is training 2 hours per day has very different hydration requirements from a 70KG male who sits at a desk most of the time.  It is difficult to define hydration requirements as our human water regulatory network is very complex and involves the central nervous system, several organ systems as well as several inter-individual differences. Our body does a great job of holding on to water by reducing urine production and other compensatory responses when it deems water intake to be insufficient. However, on an ongoing basis, body water is lost through the kidneys, skin (i.e. sweating), respiratory system and gastrointestinal systems. Individual water requirements can vary on a day-to-day basis because of differences in physiology, physical activity, climate variables and dietary content. Therefore, we can say that there is no set rule for hydration. However, if you are drinking around 0.5L of water per day I can guarantee that you are dehydrated! I do work with my clients to usually get them up to around 2L per day.

You can gauge how well you’re hydrating by assessing for symptoms of hydration and urine colour.

Symptoms of dehydration in adults include:

Symptoms of severe dehydration in adults include:

You can gauge your hydration levels from this chart:

If you are very dehydrated or severely dehydrated you may also need some electrolytes in your water to recover. If your urine is persistently at the bottom end of this scale and you feel that you are hydrating adequately, you should go see a doctor as there may be underlying health issues. If your urine colour is persistently at the lower end of this scale and you are NOT hydrating adequately then aim to gradually increase your water intake to 2L per day and see if that makes a difference.

Does Coffee Dehydrate You?

Caffeinated drinks such as coffee, black tea, green tea and caffeinated soft drinks have a mild diuretic effect. That means that they encourage the kidneys to excrete more urine from the body. However, fluid gain from coffee or tea outweighs the fluid loss so you will gain some hydration from tea, coffee and caffeinated soft drinks. Keep in mind that caffeine is a neuro stimulant so you should aim for a maximum of 2 shots per day. The rest of your hydration needs should come from water.

Can You Drink Too Much Water?

Absolutely. Drinking excessive amounts of water can be more dangerous than dehydration. Drinking water or not having a way to remove it (e.g. kidney or bladder issue) can cause water levels to build up in the body and over dilute our important blood electrolytes, sodium, potassium, chloride and bicarbonate. Electrolytes are naturally occurring substances that provide a small electrical charge when dissolved in water. This electricity is then used to perform various automatic functions within the body including maintaining fluid balance through a process known as osmosis. Sodium is the electrolyte most affected by over hydration. Sodium is a crucial element that helps keep the balance of fluids in and out of cells.  When its levels drop due to a high amount of water in the body, fluids get inside the body and brain cells, leading to a condition called hyponatremia.

Signs and symptoms of hyponatremia:

You may note that nearly all of these symptoms are the same as that for dehydration.

Signs you are drinking too much water:

Very active individuals need to focus on the importance of hydration more than others and really focus on fluid intake during training and competition to achieve a competitive edge. Studies have shown that dehydration can significantly affect performance and recovery. Hypohydration impairs exercise through a range of mechanisms, including a reduction in blood plasma/volume, impaired cardiovascular function, muscle blood flow and thermoregulatory capacity. Additionally, hypohydration may have an effect on neuromuscular function and psychological strain. Personally, I have found that if I don’t hydrate well during training I will pay the price later in the day with major fatigue and possibly a headache. 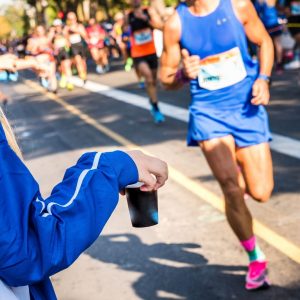 There are many ways for professional athletes to assess hydration levels during and after training and competition such as:

As weekend warriors we don’t generally have access to these technologies so we can focus on body mass, vital signs and sensation of thirst.

Here is a very easy way to measure fluid losses during training:

Historically, endurance athletes have been told that if they are thirsty then they are already dehydrated. However, this lead to a trend of overhydration in participants during endurance events such as marathons. For example, a study in 2005 revealed that an alarming 13% of finishers of the Boston Marathon had hyponatremia and 0.6% of finishers were critical. This study only mentions finishers so we cannot take into account the number of people who dropped out due to symptoms of overhydration. Therefore, if you see someone struggling in a marathon they are more likely to be over hydrated rather than under hydrated.

A sodium intake plan needs to be customised to an athlete’s individual experience, sweat rate and sweat sodium content, exercise intensity and environmental conditions. Everyone excretes different levels of sodium but some individuals are much higher salt sweaters than others. Here are some signs that you may be a higher sodium sweater:

Although widely variable, average sweat rates range from 0.3 to 2.4L/h and the average sodium sweat content is 1g/L. A sports drink containing sodium in the range of 10-30mmol/L (230-690mg/L) results in optimal absorption and prevention of hyponatremia. This concentration is typically found in most commercial sports drinks. The American College of Sports Medicine recommends starting with a sodium intake of approximately 300-600mg/h (1.7-2.9g salt) during prolonged exercise and adjusting accordingly. As mentioned above, water losses should be replaced at 1.5 x calculated fluid loss. More of this fluid is retained when there is a moderate to high sodium content (>60mmol/L). Some athletes use salt supplements if they are particularly salty sweaters.

In summary, to avoid dehydration or hyponatremia use the following cues:

Are Sports Drinks Better Than Water?

The answer is it depends on the duration of exercise, the type of sport the athlete is participating in and the intensity of exercise (note: for this post, I will focus on hydration only. I will cover fueling in another post).

In average or colder temperatures, intense, physical activities such as exercise or sports lasting longer than 90 minutes have been shown to benefit an interim intake of electrolytes through either a supplementation such as a sports drink or through a food such as watermelon or coconut water. If playing sports or at a competition, it is extremely important to trial these interim foods and drinks prior to game day as they might have unforeseen consequences such as bloating, or stomach upset. Sources that provide hydration, electrolytes, and a small number of calories in longer events can provide extra energy and can be beneficial to keep athletes in peak performance for a longer period.

When recommending sports drinks to clients I tend to go for ‘as clean as possible’. Many of the current popular commercial sports drinks are loaded with colourings, flavourings, preservatives etc. As an endurance runner, I have always found water with an added good quality, powdered electrolyte a great way to hydrate. Ingredients of a good quality electrolyte drink should include:

The best, and largest amount of fluid intake an individual should consume comes from regular water. Hydration can also come from many foods such as vegetables, fruits, beverages, and proteins such as seafood or poultry. Another natural way to hydrate or rehydrate post exercise is coconut water. Coconut water is the liquid endosperm of green coconuts and is rich in electrolytes, vitamins, minerals, natural sugars and proteins. Studies have shown that coconut water is as hydrating as commercial sports drinks. Also, athletes found it easier to consume than water or sports drinks and had less chance of nausea and stomach upset after intense physical activity.

Sugars found in fruits include fructose, glucose, and sucrose. Small amounts of sugar present in fruits  help to bind electrolytes (sodium in particular) and water to help deliver water and nutrients to the muscles faster, thus supporting water retention and an individual’s hydration status. Two fruits that have some of the largest quantities of water present are watermelon and strawberries. Both these fruits are low in sugar content compared to other fruits such as bananas. However, they contain enough sugar and water to aid in hydration post exercise.

Here is the water content of commonly consumed foods and liquids: 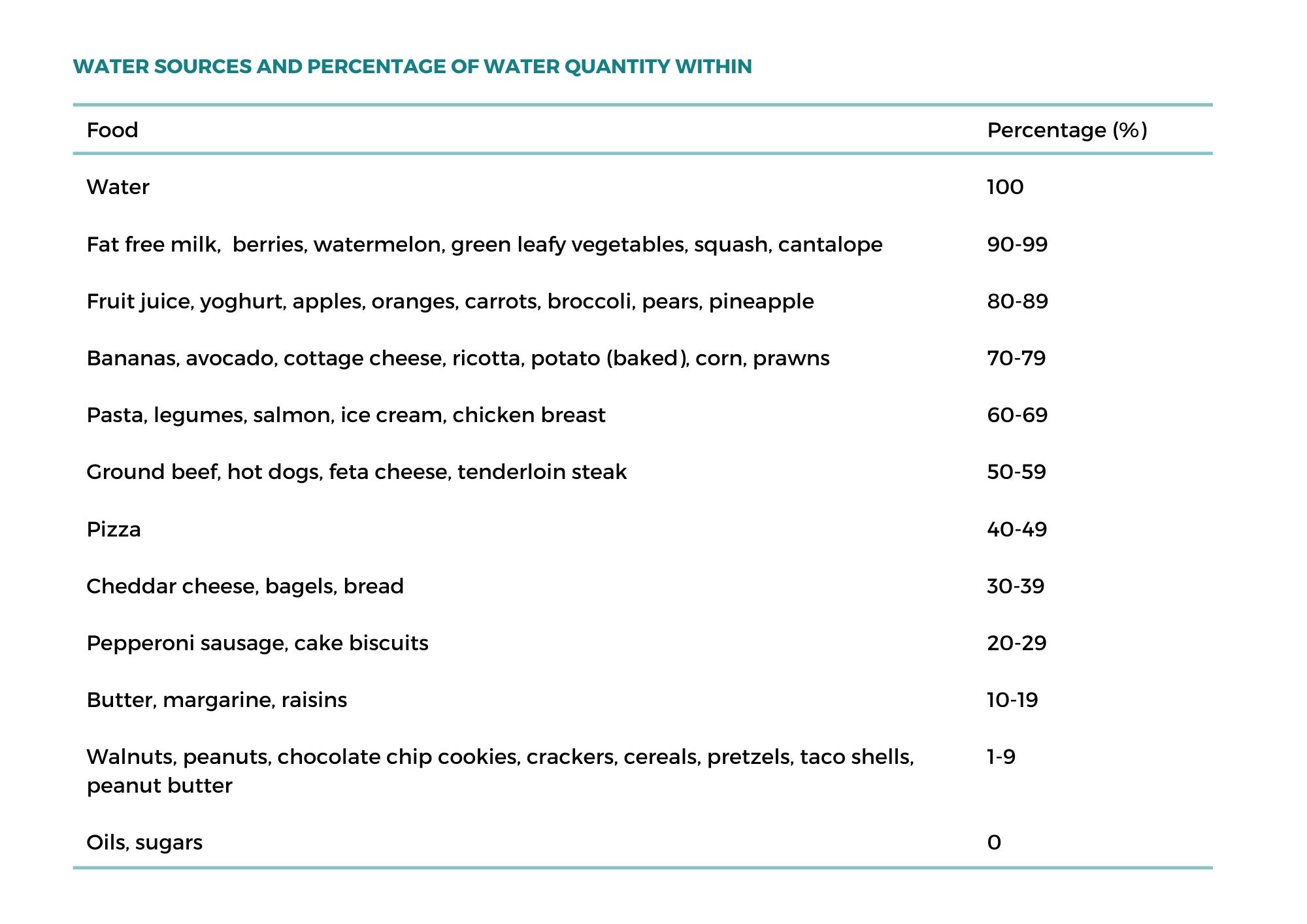 When working with athletes, here are some ways to assess hydration (sourced from Belval et al 2019): 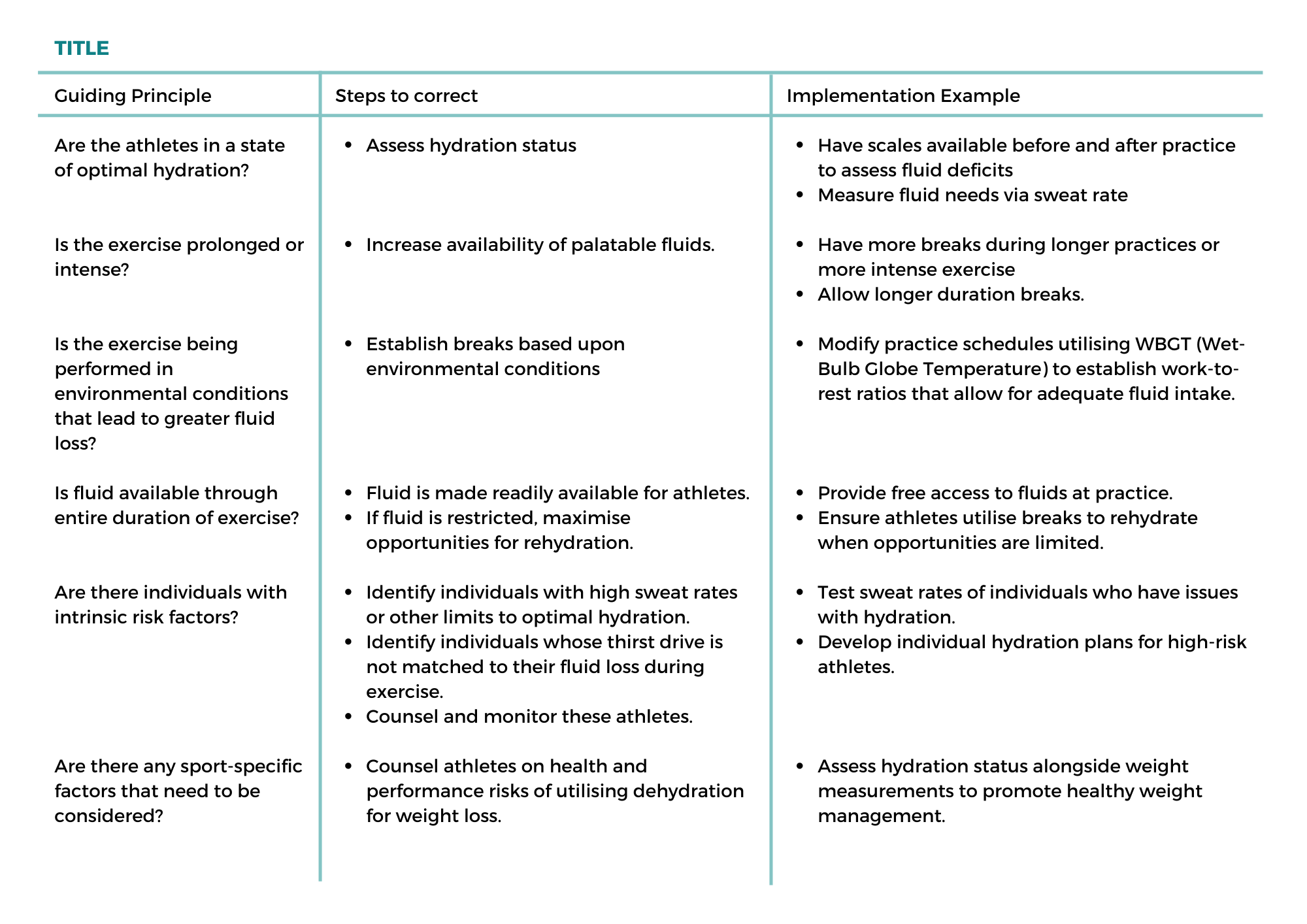 Other Reasons for Dehydration

Dehydration can also occur from the following:

The Importance of Hydration

As you can see from the above, in order to lead a long and healthy life, hydration is a habit that you should be attempting to optimise. Over and under hydration both have consequences for long term and short term health. If you need help with your hydration, book in to see me today.